skip to main | skip to sidebar

An Evaluation of Obama's Health Care Plan - Part I

The following is an evaluation of Barack Obama's Health as transcribed from the candidate's website (see video).

Obama: "The system's broken, I think people all across the country recognize that."

He is correct. We spend more of our GDP on health care expenditure's with less return on life expectancy.

Obama: "I don't accept the idea that in the richest country on earth we should have 47 million people without health insurance, and millions more being bankrupt from medical bills."

Herein lies Obama's first failed assumption regarding economics. Riches and resources do not lead to economic welfare. The protection of that property of resources leads to welfare. He views economics as the job of distributing scarce resources. Economics is rather mobilizing a market aggregate such that existing resources of production, however abundant or scarce, are combined in news ways to create new value.

Yet, he is also right. It is unacceptable. Many remain without access to a regular health provider. Many remain without access to needed medications. But you have to ask to what degree to individuals reap what they sow? The American College of Preventative Medicine (ACPM) estimates that 90% of current diseases are preventable, most of which are caused by a lifetime of smoking and obesity.

So is it acceptable, that individuals who take personal responsibility on their health then pay through tax dollars for individuals that abuse their bodies through smoking and poor eating?

Obama: "And I know something about this personally. My mother died of ovarian cancer when she was 53. And in the waning months of her life, she was not spending time thinking about how to get well or even how to come to terms with her own mortality. She was spending time thinking about how the insurance company was going to cover her expenses, because she had gotten sick just before taking a new job. It wasn't clear whether this would be considered a pre-existing condition. And that's wrong. There's something fundamentally wrong about that."

First, allow me to say my respects for Sen. Obama and his family for their loss. His mother would be proud of her son at this time. The risk-factors related to cancer in general, and ovarian cancer specifically still argue for the need to stimulate the economy of health care toward preventative health measures.

Cancer is still a medical mystery, but we are learning its risk factors, namely ovarian cancer. Despite uncontrollable factors such as age and genetic predisposition, obesity remains as an important risk factor for developing ovarian cancer, as well as the use of fertility drugs and oral contraceptives.

In a system of health care outlined by Sen. Obama, people do not own their own risk. They transfer that risk to someone else, namely the government. Therefore they do not bear the incentives to adopt preventative health measures in order to lower that risk.

Obama: "Which is why as President of the United States, my goal is to adopt a health plan that covers all Americans. The very first promise I made on this campaign was that as President, I will sign a universal health care plan into law by the end of my first term in office. The key to making this happen is to overcome the resistance we will see from drug companies, insurance companies, HMOs..."

The graph below illustrates the consequence of this reform and the reason why several entities in the health care market resist this plan. 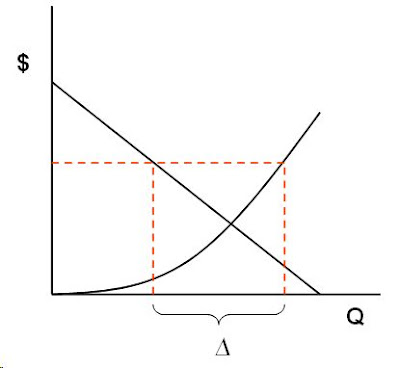 As the quantity of enrollee's, Q, increases, the cost (the bottom curve) rises exponentially for insurance providers to manage the cost. The erroneous assumption is that costs per member will decrease as members, Q, increase. Yet, the current model of health care lacks an economy of scale allowing such an effect. What a comprehensive coverage entails is that Q is fixed at some value (the right red dotted vertical line). This, presumably above equilibrium would force the prices of health provision by the plan higher.

This alone argues against the proposal. However, there is a deeper problem, having to do with innovation. Individuals do not entrepreneur on property they do not own. In this case, we are dealing with the property of health risk. When an individual enrolls into an insurance plan, they transfer their risk to the insurer. The insurer owns their risk. There is a loss of incentive for reducing that risk aside from the rise in premium.

A consumer health participant could entrepreneur on their own bodies to envision measures for themselves to lower risk in collaboration with their communities and health providers. Without bearing the cost of this risk, they lack the incentive toward this innovation.

Obama: "Over the last ten years alone, the drug and insurance companies spent one billion dollars in preventing health care reform from happening."

Companies perform actions to increase the wealth of owners through profits. I do not condone nor have intimate knowledge of all the details of this expenditure. However, Obama paints a picture that it is the people vs. the insurance/drug companies. The real picture is freedom versus advocacy and reform of any nature. We live in a health care system rot with bureaucracy that taxes the system billions of dollars. We don't need more government. We need less government.

Obama: "That's going to require then a mobilization of the American people to insist on a Congress and a White House that are actually going to deliver this time. It is also going to have to have someone with the capacity to bring people together across various divides - getting business, getting labor, getting doctors, getting nurses, consumers joined together to craft this kind of legislation. I think it is going to be difficult, but I think it is going to be possible. The time is right, because nobody is satisfied with the system."

In 2006, there were 633,000 physicians and surgeons according to the US Dept. of Labor. There were 2.5 million Registered Nurses, including Nurse Practitioners. There were 66,000 Physician Assistants. There were 99,000 Occupational Therapists. There were 173,000 Physical Therapists. Finally, there were 243,000 Pharmacists. There are currently 25 million individuals with chronic illness. Consider then, the logistics of getting "doctors, nurses, and consumers joined together to craft this kind of legislation". How many would have to agree in order to adopt such a reform? In 2006, it would require 28,714,000 individuals to join together to make such a reform.

Obama: "My plan begins by covering every American. If you already have health insurance, the only thing that will change for you is the amount of money you will spend on premiums; that will be less than what you are spending now."

The graph below illustrates the consequence of this reform and the reason why premiums would actually INCREASE rather than remain or even decrease.

As the quantity of enrollee's, Q, increases, the cost (the bottom curve) rises exponentially for insurance providers to manage the cost. The erroneous assumption is that costs per member will decrease as members, Q, increase. Yet, the current model of health care lacks an economy of scale allowing such an effect. What a comprehensive coverage entails is that Q is fixed at some value (the right red dotted vertical line). This, presumably above equilibrium would force the prices of health provision by the plan higher. This is happening currently in Massachusetts with their state comprehensive health coverage.

If you hurt yourself or need care, better bring a good book because you are going to wait a long time.

Obama: "No one will be turned away because of a pre-existing condition or illness. Everyone will be able to buy into a new health insurance plan, similar to the one that every federal employee from a postal worker in Iowa, to a congressman in Washington currently has for themselves. It will cover all essential medical services including preventative, maternity, disease management, and mental health care. It will also include high standards for quality and efficiency."

How will the 28,714,000 individuals described above, not including other stakeholders, agree on "essential medical services"? Every special interest will vie their piece of the pie in argument for what service or product is "essential". In addition, there is difficulty in agreeing on standards of care and standards for efficiency of delivery.

Obama: "If you can't afford this insurance, you'll receive a subsidy to pay for it. If you change jobs, your insurance will go with you."

In health disparities research, it is a continuing question of what came first. Did the burden of illness and disease arrive in individuals prior to their poverty, or did their poverty beset their chronic illness? People today on medical assistance, in the form of medicaid, still fail to rise out of their poverty. They don't necessarily abuse the system. However, there is a lack of cognitive awareness with regard to their inherent life value. They cannot translate the quality of their health with the ability to increase their earning potential. My suspicion is they will remain on subsidies forever.

Obama: "If you need to see a doctor, you will not have to wait in long lines for one."

Double D
thats a great blog
i like it
wow

This work is licensed under a Creative Commons Attribution 3.0 Unported License.