skip to main | skip to sidebar

Emergence of profit and loss by uncertainty 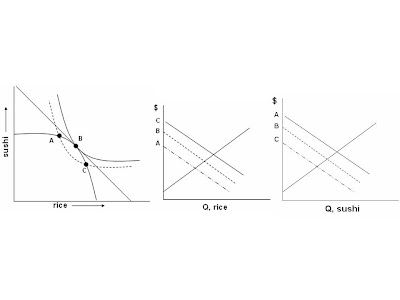 Mises writes in Profit And Loss "If all people were to anticipate correctly the future state of the market, the entrepreneurs would neither earn any profits nor suffer any losses. They would have to buy the complementary factors of production at prices which would, already at the instant of the purchase, fully reflect the future prices of the products".

I tried to construct some kind of proof for this. Please look at the above three figures as I explain.

Let's suppose we have a market for rice and sushi does not yet exist. An entrepreneur is considering inventing sushi. She needs rice to make sushi. What price results in the market for rice? If we can answer this question, we can understand what Mises says "the total costs of production depends on the prices for the product" and we can understand what Kirzner writes how uncertainty fuels entrepreneurship.

Please look at the graph on the left. It shows the relationship between sushi and rice in our entrepreneur's future envisioned market. The first curve (left curve) bulging out reflects the production possibilities curve for rice and sushi. If I give up a certain amount of rice in society, I relieve resources to produce sushi.

The straight line curving down is the budget curve. The amount of rice and sushi cannot exceed beyond the boundary of this curve. This represents the scarcity of resources.

Finally the last curve (right curve) bulging in reflects what is called the indifference curve. Please focus on the solid curve and ignore the dotted one for now.It represents how changes in the consumption for rice and sushi reflects people's welfare. Along this curve people are indifferent to the changes in sushi or rice consumption. In the beginning of the curve, you have large decreases in sushi consumption (the curve is sloping down) corresponding to small increases in rice consumption. Yet, there is no change in society's happiness or welfare.

Point B reflects the amount of sushi and rice optimally consumed in society for three reasons. It lies along the production possibilities curve, meaning it is possible to produce that amount of sushi for a given amount of rice represented at point B. This point does not exceed the budget curve, so society has enough resources to produce both rice and sushi at that point. Finally it is along the indifference curve, where welfare is possible to achieve.

So what does this mean for the entrepreneur? To answer this I need to first introduce the middle and right curves. They show the supply and demand for both sushi and rice. As we already know these curves reflect the equilibrium price of these two products. I know nothing in real markets is at equilibrium, but please bear with me.

How do these three curves relate? Look at the left curve's point B. It reflects an optimal amount of sushi and rice produced and consumed given all the information in the three curves. This consumption is reflected in the curve B in both the middle and right curves.

Remember in the left graph, we only focused on the bold indifference curve. This represents that we are CERTAIN about how the market will value the composition of sushi and rice consumption. Mises and Kirzner would argue in this situation there is no profit or loss. So now answering the final question, how does uncertainty foster an emergence of profit or loss?

This work is licensed under a Creative Commons Attribution 3.0 Unported License.